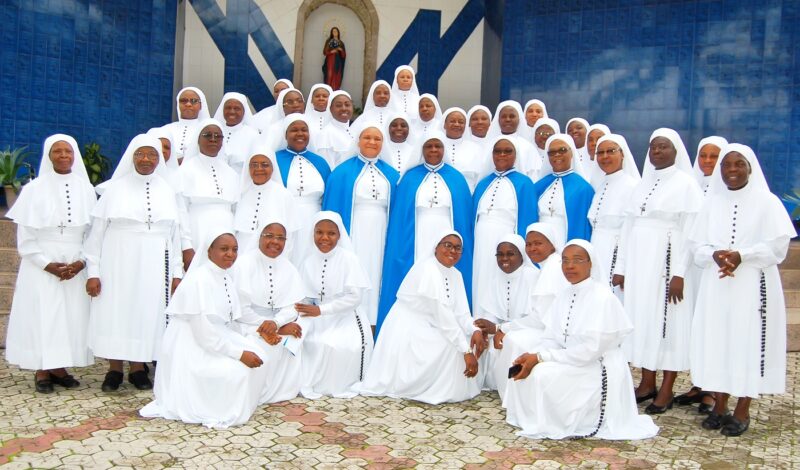 BRIEF HISTORY OF CONGREGATION OF DAUGHTERS OF MARY MOTHER OF MERCY, (DMMM)

The Congregation of the Daughters of Mary Mother of Mercy (DMMM) is a Religious Institute of active apostolate that is specially dedicated and named after Mary Mother of Mercy. Our Lady mirrors the mystery of God’s mercy in her concern and sensitivity which she shows to all who are in need and call to her for help.
The Objective of the DMMM Congregation is to extol God’s infinite tenderness in the face of human weakness and human misery of all kinds. Looking up to Christ as its model, the members imitate the Incarnate Son of God who demonstrated God’s mercy by his compassion towards the poor, the downtrodden, and the rejected of human society. For in whatever manner of form that human distress is manifested, Christ is there to relieve their miserable conditions and the Daughters of Mary Mother of Mercy have undertaken to go there with him.

The DMMM Congregation was founded on 29th December, 1961 by His Lordship, Most Rev. Dr. Anthony Gogo Nwedo C.S.Sp, the First Bishop of the Catholic Diocese of Umuahia. His motivating drive was to build up the missionary territory of the Local Church he was entrusted with, through the exemplary lives of the members; as well as through their devoted service to the works of the apostolate. Its members take and live the three public Vows of obedience, chastity and poverty. It started as a Pious Union with 29 young maidens when they were received at St. Xavier College, Bende. With the increased in number of aspirants, the young community moved to Nbawsi, where the Mother House of the Congregation was built. In 1963, it became necessary to give the aspirants the initial formation to religious life. Providence sent the Sisters of St. Peter Claver from Rome, who generously undertook to train the first group of eight aspirants. They started their pre-novitiate formation at the convent of the Sisters of St. Peter Claver in Ibadan. On 8th December, 1964, six of these aspirants were received in the Novitiate House of the Congregation in Rome. These Foundation members listed below came back to Nigeria and on 8th December, 1966, they made their First Profession at St. Theresa’s Catholic Church, Afara Umuahia, Abia State.
1. Sr. Mary Joseph Therese Iwenofu of Blessed Memory
2. Sr. Mary Anthony Josefa Igboka
3. Sr. Mercy Nezieanya of Blessed Memory
4. Sr. Maria Concepta Okparaji of Blessed Memory
5. Sr. Mary Assumpta Nwulu
6. Sr. Maria Aloysius Onyenehide.
DMMM Congregation was canonically erected as an Institute of Diocesan Right on January 17, 1962 by the Founder himself, Most Rev. Dr. Anthony Gogo Nwedo C.S.Sp, now of blessed memory. On the recommendation of his successor, Most Rev. Dr. Lucius Iwejuru Ugorji, it was recognized as an Institute of Pontifical Right by the Congregation for the Institutes of Consecrated Life and Societies of Apostolic Life by the Decree of February 2, 1994.

As an animating factor, the Spirituality of the Congregation is based on the five virtues of: Charity, Humility, Prayer, Penance and Abandonment to the will of God. The members endeavour to live out these virtues in their communities and the various apostolates they are engaged in: the orphanages, schools, hospitals, homes, social services and other pastoral engagements. In that way, they are able to achieve the aim of the Congregation, which is “the sanctification of the members by the observance of the evangelical counsels and the salvation of souls”. They constitute themselves into a Spiritual Powerhouse, “making their very life a sign of the love of God for the world.”

The Charism of DMMM Congregation – “bearing witness to the mercy of God” is based on the merciful love of God towards his people especially the poor. Imitating this divine attribute of God, the Daughters of Mary Mother of Mercy bear witness to his merciful love for his creatures with acts of compassion, forgiveness and kindness. They are embodiments of God’s mercy by their thoughts, words and behaviour among themselves and towards those they encounter.
DMMM Sisters show mercy as compassion by loving and caring for the poor and the under-privileged in hospitals, schools, homes, orphanages, centres, etc. They live out mercy as forgiveness by excusing one another’s faults; seeking and accepting reconciliation from those who have wronged them; promoting peace and harmony in whatever field of apostolate they are engaged in. They practice mercy as kindness by offering Christ-like hospitality to all who cross their paths, being tender hearted towards one another, sharing each other’s joys and sorrows and giving fraternal correction to one another.

The DMMM Congregation since inception has grown from strength to strength as it follows the footsteps of Christ, the Merciful Saviour. Over the years, the Congregation has celebrated seven General Chapters. In August 2015, the following were elected to pilot the affairs of the Congregation for the next six years:

In August 2021, the following were elected to pilot the affairs of the Congregation for the next six years:

TThe Daughters in imitation of Christ, the Merciful Saviour and Mary our Mother of Mercy continue to witness in unity as they positively cater for the poor and needy in different countries of the world. Our task is to continue the work of evangelization through witnessing in unity to the mercy of God in places where we have not yet established our presence. We have a rich record of highly qualified Personnel for different types of apostolate that we engage in, and in our specific areas of needs. We are grateful to God for all his blessings on our Sisters and our apostolate in the various Local Churches they serve. We pray for God’s continued graces in all our endeavours and for the maternal protection of our Mother of Mercy on our members and benefactors.

To God be the Glory!

The DMMM Congregation was founded on 29th December, 1961 by His Lordship, Most Rev. Dr. Anthony Gogo Nwedo C.S.Sp, the First Bishop of the Catholic Diocese of Umuahia.

We use cookies on our website to give you the most relevant experience by remembering your preferences and repeat visits. By clicking “Accept All”, you consent to the use of ALL the cookies. However, you may visit "Cookie Settings" to provide a controlled consent.
Cookie SettingsAccept All
Manage consent

This website uses cookies to improve your experience while you navigate through the website. Out of these, the cookies that are categorized as necessary are stored on your browser as they are essential for the working of basic functionalities of the website. We also use third-party cookies that help us analyze and understand how you use this website. These cookies will be stored in your browser only with your consent. You also have the option to opt-out of these cookies. But opting out of some of these cookies may affect your browsing experience.
Necessary Always Enabled
Necessary cookies are absolutely essential for the website to function properly. These cookies ensure basic functionalities and security features of the website, anonymously.
Functional
Functional cookies help to perform certain functionalities like sharing the content of the website on social media platforms, collect feedbacks, and other third-party features.
Performance
Performance cookies are used to understand and analyze the key performance indexes of the website which helps in delivering a better user experience for the visitors.
Analytics
Analytical cookies are used to understand how visitors interact with the website. These cookies help provide information on metrics the number of visitors, bounce rate, traffic source, etc.
Advertisement
Advertisement cookies are used to provide visitors with relevant ads and marketing campaigns. These cookies track visitors across websites and collect information to provide customized ads.
Others
Other uncategorized cookies are those that are being analyzed and have not been classified into a category as yet.
SAVE & ACCEPT